The Most Under-Rated Tool to Improve Mobility

An incredibly insightful article written by my friend and Certified Athletic Therapist Mai-Linh Dovan from Rehab-U, I just had to share!

These days, everyone wants to sell you the latest, fanciest mobility tool.  It’s pretty cool to have the latest tools like vibrating foam rollers and balls, high tech massage guns, colorful cups and scraping tools.

Many people still think mobility tools need to be purchased.  But tools aren’t necessarily objects.  A tool is anything used to carry out a particular function or provide a desired outcome.  So before spending money on an implement, best first make sure you are using the tools at hand to their fullest potential.

As a matter of fact, the most under-rated tool to improve mobility can’t be bought.  The simplest and most underused mobility tool is actually free, easily accessible, not to mention that every client you work with already possesses it.

Breathing is the simplest and most under-rated mobility tool

While efforts to improve mobility are often focused on mobilizing the musculoskeletal system, breathing can help mobilize the nervous system, a critical factor for optimal mobility.

Yes, you read that right: mobilize the nervous system.

Here is why breathing to mobilize the nervous system can not only optimize your mobility interventions but also avoid adding further stress to a system that is already under threat.

While we are never exclusively in one system or the other, each is dominant under certain conditions.  The ability to effectively transition between the two based on the task, environment, circumstances, etc. is of utmost importance.

Both suboptimal breathing patterns and prolonged stress can cause sympathetic overactivity. There are several physiological, neurological and psychological factors that can both maintain someone in a sympathetically driven state or prevent them from efficiently moving towards a parasympathetic state.

BREATHING AND THE NERVOUS SYSTEM

The nervous system’s role is to protect the body from excessive stress. Its main concern is always to generate a stress response as a protective mechanism.

Now, we must remember that this is generally and genuinely a good thing.  When we talk about the sympathetic and parasympathetic systems, it’s important to understand that neither one is better than the other.  We need both to function optimally under the conditions where they are required to.

Trying to break through rigidity and stiffness with the use of aggressive rolling and smashing while the nervous system is in a state of threat may actually increase the protective response.  Or at the very least, you probably won’t get the optimal effect.

Diaphragmatic breathing is the first step to decreasing nervous system threat and is an easy, accessible tool that every client can easily take ownership of.

The first step is learning to breathe, specifically using nasal breathing.  Mouth breathing leads to a decrease in the amplitude of diaphragm movement.  This decrease in diaphragmatic movement and work results in a decrease in thoracic expansion and increased tone in the secondary breathing muscles: the scalenes, sternocleidomastoid and pec minor.  Excessive tone of these muscles results in elevation of the thorax, further inhibiting the diaphragm and decreasing its effectiveness.

Nasal breathing breaks this cycle by increasing the depth of inhalation, strengthening the diaphragm and promoting thoracic and rib cage mobility.

Prone, or Crocodile breathing, is a great drill to initiate individuals to proper breathing.  The feedback provided by the floor helps bring awareness to deep breathing.  The cue should be to expand the circular area of the abdomen that is in contact with the floor during the inhale, but not to push the abdomen into the floor.

Once your clients have learned to breathe, you can direct breathing to specific areas of tension, such as the low back, quadratus lumborum and pec minor, for example.

The impact of breathing on mobility is widespread.

If the breath is shallow or apical, the secondary breathing muscles (accessory breathing muscles), the upper trapezius, scalenes, sternocleidomastoid, levator scapulae and pectoralis minor become hypertonic.  Hypertonicity of these muscles can impact function of the scapula and shoulder girdle leading to mobility deficits.

Breathing is also a fundamental competence for core stability.  An effective breathing pattern is the necessary foundation on which to build the core and then, movement.  Insufficient or poorly coordinated activation of the diaphragm can compromise the stability of the spine.  In turn, this impacts the hip complex mobility because the body looks for stability elsewhere, namely from the psoas, hamstrings and pelvic floor.

Furthermore, optimal breathing provides a natural mobilization of the rib cage and spine.  A deep inhale allows the diaphragm to descend, the chest wall to expand, and the thoracic spine to move into extension.  As we exhale deeply and relax, the thoracic spine moves into flexion.

Mastering the art of breathing and using breathing to mobilize the nervous system is a must in this fast-paced and high stress world.  Starting with breathing sets the stage for the subsequent elements of an optimal mobilization sequence by removing threat and the protective response.  It is the easiest and most under-rated tool that every single client has access to and can take ownership of.

Your clients are going to move based on the resources they possess.  If you want them to move differently, you need to give them access to more and better resources.  When we use breathing to mobilize the nervous system, we are essentially providing it with more resources to establish a sense of safety.  This allows the body to let go of a lot of protective tension that we typically try to address via the more common methods.

While the latest technology in mobility tools can be cool, there are other options that are simpler, more accessible, and probably more efficient.  The key is to become better at identifying the right tool for the right person at the right time.  Will the client benefit more from nervous system mobilization than rolling and smashing tissue?  These are the choices that drive the outcomes.

Mai-Linh just launched a brand new online course called Mobility Fundamentals and has kindly provided me a $50 discount to share with my fitfam 😊.  Click here for more information and to access your exclusive discount using code NATHALIE50! 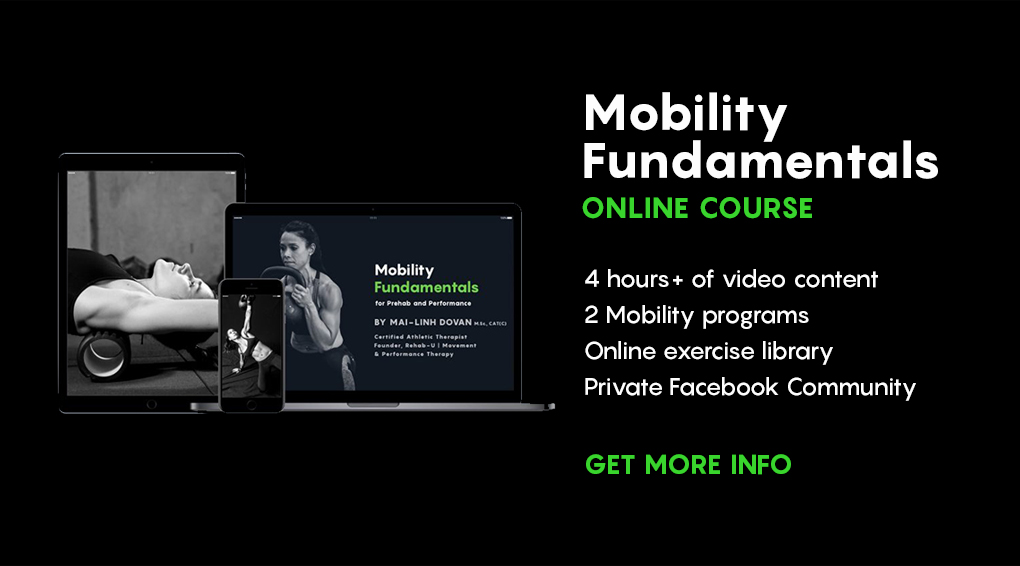 There are no comments

Want to Increase Your Compensation?
There is a major labor shortage in the fitness industry; let’s see how it can impact your earning potential.
I respect your privacy. Your information is safe and will never be shared.